TED 2014 has just ended here in Vancouver and I have finally now experienced an event I’ve heard a lot about for many years. I’ve watched TED talks online for as long as I’ve watched anything online and the real deal did not disappoint. Attending TED for the first time has been intense, wonderful, and dizzying and it was great to be here for it’s special, 30th anniversary year. Highlights from my experience are difficult to streamline into a blog post. So this is my best shot.

Each day at TED has presented numerous inspirational speakers and amazing ideas, curated into themes by the organisers such as ‘Liftoff!’, ‘Reshape’, ‘Hacked’, and ‘Onward’. These sessions took place in the event’s central venue; a custom-designed, wooden amphitheatre – built over only a few days before the event opened. These talks were usually 12 or 18 minutes long and sometimes formatted as interviews where relevant. The changing topics and formats were paced in a way that meant I rarely felt tired or restless – which is amazing since I’ve had about 5 hours sleep each night! You can already see some talks from these sessions including Colonel Chris Hadfield on conquering fear, and Edward Snowden on privacy – a talk delivered via a roving telepresence robot!

A secondary, slightly smaller venue housed the ‘All-Star’ sessions. These were totally packed-out as they consisted of many notable TED speakers from the past 30 years, each giving 4 minute talks to update or reflect on their work and ideas. Speakers here included a wide range of awesome folks such as Sir Tim Berners-Lee, Imogen Heap, Dan Gilbert, Jimmy Wales, Sir Martin Rees, and even General Stanley McChrystal. All of them had just 4 minutes, which kept the energy high, and the pace steady. 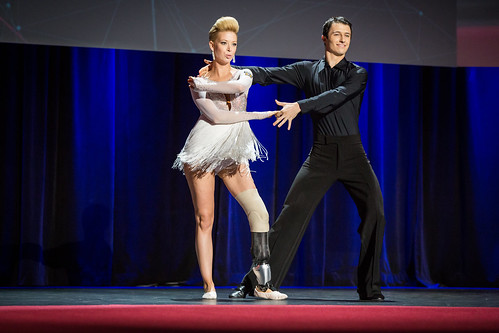 I was very happy to see that some of the best talks of the week were about science. Ed Yong (Nat. Geo. blogger) told us about parasites, Sara Lewis (Tufts) about fireflies and Andy Connolly (U. Washington) about the future of astronomy. All extremely well-crafted and well-delivered talks about often complex topics. Hugh Herr’s (MIT Media Lab) outline of the future of bionics and prosthetic limbs was not just a tale of amazing science, but also included a live performance by a ballroom dancer who lost her leg in the Boston Marathon bombings and can now dance again thanks to the help of his MIT lab. A perfectly ‘TED’ moment and a moving thing to witness.

There is also a special place in my heart for some of the technology speakers, including Margaret Gould Stewart, who talked about designing and changing Facebook and its impact on user behaviour; and Del Harvey who won everyone over with her sardonic delivery of a talk about managing the stranger side of Twitter. Keren Elazari delivered a moving lesson in why hackers may keep us all safe and keep governments honest – a talk that will be timely if posted quickly to TED.com, and which proves how refreshing and important it is to have women talk about tech. Something that is all too rare.

Supermodel Geena Rocero came out as transgender live on the TED stage; Mellody Hobson gave a challenging and optimistic talk on race; and Mark Ronson gave a talk/performance about remixing and reclaiming music – partly involving a live remixing of other TED talks within his own. It was pretty genius – though it may have been lost on a large chunk of the audience.

The average age of TED attendees is predictably quite high – and I think that must be part of the thinking behind the TED Fellows program – the whole reason I’m here with about 20 other folks from around the world. By supporting its growing Fellows community, TED is creating new connections and networks, but also injecting a chunk of people into the conference that otherwise would not be able to attend. As part of our participation, all the fellows give their own short talk at the opening of the event.

The prospect of giving my own 4 minute talk on Monday was a big part of my life leading up to the conference. 4 minutes is not a long time, and that fact seemed only to amplify the preparation required, and the intensity of my nerves. I felt shaky and sick as I walked into the lights on Monday morning, but once there, a strange calm fell upon me and I simply delivered my talk. My intense preparation suddenly seemed like a wise investment, and although I can’t say I relaxed, I definitely enjoyed it. Those 4 minutes flew by in the end.

I used my talk to highlight the wonderful work we do at the Zooniverse, and framed what we do in the context of ‘big data’ in science, and in discoveries that are waiting to be made if we allow the public access to our data. I think it went well, and I’ve certainly had many attendees and journalists ask me about in the days since. Not all the Fellows talks go online – but we’ll each get to see our own eventually. They edit them and send them out in the weeks and months to come.

The TED Fellows programme also provides coaching, mentorship, training and a bunch of other amazing experience and advice too. I can’t recommend it highly enough. A huge thank you goes to Tom Reilly, Shoham Arad, Sam Kelly, Corey Mohr, Patrick D’Arcy and the whole TED Fellows team. I’m so excited about the collaborations and ideas being generated between the group and what we can do in the future.

Giving the talk was unforgettable, and attending TED as been a dream come true. I am feeling motivated and inspired, but most importantly I’ve made lots of new connections and contacts for projects to work on in the near future. For now though we have one more engagement: a farewell dinner with the rest of the TED Fellows. Then it will be time to go back to Oxford and resume regularly scheduled programming. After .Astronomy I always get the .Astro blues and I can tell it will be the same for TED, but it is time to head home and see how I can take all these ideas and actually do something with them.

3 thoughts on “Ideas Worth Spreading: My TED 2014 Experience”